Poland
Polish born pianist, Anna Marchwinska specializes in vocal chamber music. She comes from a musical family, her mother was a famous Polish soprano and professor Halina Slonicka and her father a pianist and also a professor at the F.Chopin Academy of Music in Warsaw.

She graduated magna cum laude from the Warsaw Music University, she also holds a Master of Music in Piano Performance from Stanford University and a Master of  Arts in Vocal and Instrumental Accompanying from the  prestigious  Juilliard School, where she held a position of vocal coach until 2001. She also participated in the Tanglewood Festival, Music Academy of the West in Santa Barbara, Merola Opera Program and Chautauqua Opera Festival. She currently resides in Warsaw and  works as a head of the music staff at Teatr Wielki/Opera Narodowa. She also works for the Polish Radio, National Philharmonic and the Beethoven Easter Festival. Since 2009 she has been working at the Bregenzer Festspiele where she is now the head  pianist.

Ms. Marchwinska often performs with leading polish singers, Ewa Podles, Malgorzata Walewska, Mariusz Kwiecien, Artur Rucinski and many others, both in Poland and abroad. She performed in many famous venues in the US and also in Europe, Carnegie Hall, Alice Tully Hall, Kennedy Center, Concertgebough, Teatro Liceu and many others. 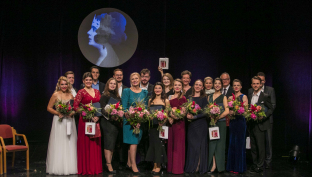 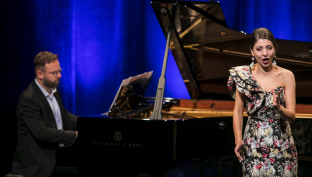